Zombies Pseudo-Ku (also known as Dude of the Living Dead Pseudo-Ku) is a sudoku game based on 6teen found on the Teletoon website. Like its predecessor, it has 6teen characters which have to be arranged on a sudoku grid so that there is one, and no more than one, of each in each row, column, and square. Unlike Pseudo-Ku, however, the characters in this game are zombies from "Dude of the Living Dead."

The pieces appear as various zombies from the show. To complete the puzzle, the player has to find which spaces they have to fit into. In order to aid with this, the player is given the option of overlaying numbers over the pictures or leaving them as they are. The characters are:

There are three levels: Easy, Normal, and Crazy. For the easy one, only 18 squares have to be filled in the 81 square grid. On the normal level, the player has to fill 36 blocks correctly. On the hardest level, a majority (54) of the blocks have to be filled. 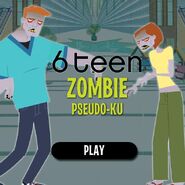 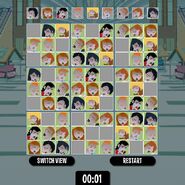 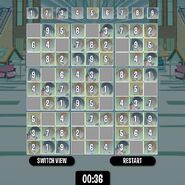 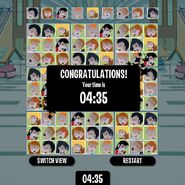 Win screen.
Add a photo to this gallery
Retrieved from "https://6teen.fandom.com/wiki/Zombies_Pseudo-Ku?oldid=34864"
Community content is available under CC-BY-SA unless otherwise noted.