Start a Wiki
Wayne is the former owner and manager of Underground Video and an employee at Burger McFlipster's. He is snarky, surly, and generally ill-mannered and slobbish. Wayne is also a movie buff who is obsessed with film.

Wayne's first appearance in the show came in "Going Underground." There, his character was well established, as he was first mentioned while Jonesy was waiting in line to try and get a job at Taj Mahome Video by two former employees of Underground Video who claimed that they weren't allowed to be nice to customers. When Wayne was finally seen onscreen, he lived up to his reputation by informing the three guys who showed up asking for jobs that the Help Wanted sign in the store window was a joke, hiring Jude and Jonesy on a whim, and then firing Jonesy and hiring Wyatt when Jonesy chose Top M16s, a movie that Wayne hates, as one of his favorite movies. Finally, when the whole group was depressed about their new year not being as fabulous as they expected, he mocked them for having high hopes and for sharing a genuine moment of friendship.

Wayne then appeared in "Deadbeat Poets Society," where he noticed Wyatt acting paranoid about the amount of foam he was receiving from Charmaine and was later seen at the poetry readings reciting poetry that he had written. Wayne then showed up in "Career Day," where he revealed that he has an affinity for a film called The 77th Samurai, which kicked off one of the episode's plots when Jude taped over Wayne's copy and he and Wyatt had to find Wayne a new one. After this, Wayne was seen in "Fish and Make Up," where he recommended a movie for Caitlin and Wade.

Wayne's ability to recommend movies to couples became a plot point in "Awake the Wyatt Within," where he recommended a movie for Wyatt to watch in order to understand what happened with Serena. Unfortunately for Wyatt, Wayne entrusted Jude with getting the movie, and Jude accidentally selected the wrong one, rendering Wayne's advice useless as it didn't get through to Wyatt correctly. Wayne was then seen in "Unhappy Anniversary," where he commented on Jonesy's boob bowl and then made fun of Jonesy for landing in a serious relationship with Nikki. Wayne's next appearance was in "Pillow Talk," where he allowed the teens a safe haven to hide from the mockery of everyone else in the mall and was oddly sympathetic to Jude's plight of having puked in Starr's mouth being brought up again.

Wayne was next seen in "In a Retail Wonderland..." There, he was revealed to have no Christmas spirit whatsoever, a condition brought on by there not being any good Christmas movies. When Wyatt tried to cheer him up, Wayne scheduled Underground Video to be open on Christmas; however, after a dream sequence that resembled A Christmas Carol, Wayne rethought his actions and got into the Christmas spirit.

After this, Wayne showed up in "Midnight Madness," where he (correctly) warned Wyatt away from falling for Serena again. He then appeared in "Welcome to the Darth Side," where Lydia began dating him after mistaking him for Wyatt and quickly grew too attached–a situation that was remedied when Jude set Lydia onto another guy. The next appearance that Wayne made was in "The New Guy," where he hired Ron to work at Underground Video after Ron impressed him by demonstrating a deep knowledge of war movies.

Wayne then had a major appearance in "Major Unfaithfulness." There, Underground Video was sold to Taj Mahome Video and became their indie department at the Galleria Mall. Wayne soon began to crack under the strain of working at a big-box store, and eventually hired Jonesy on to get Taj Mahome Video to sell off their new acquisition. Jonesy was successful at doing this, and Wayne was able to purchase the store from Taj Mahome. Upon receiving the store, Wayne made two decrees: firstly, that Jude and Wyatt would get all of their rentals for free, and secondly that Jonesy was fired from the store due to Top M16s being a horrible movie.

Wayne was then seen in "Losing Your Lemon," where he kicked the teenagers out of his store after they rendezvoused there to formulate a plan to get Caitlin back into the group. After this, Wayne appeared in "The Hunted," where he revealed that he had been receiving calls from Lydia, who had mistaken the number of Underground Video for that of a psychic hotline and had as a result been calling incessantly. He then showed up in "A Ding from Down Under" in a flashback where Wyatt recalled how Wayne fired him for spilling a coffee all over a copy of one of Wayne's favorite movies. After this, Wayne wasn't seen until "The Lords of Malltown," where Wyatt was inexplicably shown to be working at Underground Video again; there, Wayne confirmed Jude and Jonesy's accusation of him being uptight.

Wayne's final Season 2 appearance came in "Dirty Work." There, he hired Jonesy to tell Jude to get back to work, and later found out that his mother hired Jonesy to steal Wayne's fries. This second action enraged Wayne, and he spent much of the episode trying to hunt Jonesy down and get revenge for the theft.

Wayne then appeared in "Silent Butt Deadly," where he rented a movie to Jonesy for him and Nikki to watch on their date. When Jonesy returned it and confessed that he quit watching midway through, Wayne was irate until Jude revealed that Nikki destroyed Jonesy's bathroom, prompting Wayne to opine that Jonesy would never find women as hot as he once did and that, like Wayne, Jonesy would be alone forever. After this, Wayne appeared in "Wrestlemania," where he fought Jonesy in a wrestling match and lost, along the way taking an elbow to the crotch for his troubles. Wayne then appeared in "Another Day at the Office," where Jen tried to sell him a broken tennis racket, and in "J is For Genius," where he sold Jonesy a counterfeit IQ test that Jonesy used to cheat. His final Season 3 appearance came in "Life Slaver," where he sat around with Jude, Jonesy, and Wyatt while they watched old security tapes at Underground Video.

Wayne's first Season 4 appearance came in "6 Teens and A Baby." There, he gets a job at Burger McFlipster's after Underground Video shuts down (presumably due to his mismanagement) and begins sucking up to Tim. While Wayne is initially successful at making Tim like him, he eventually makes an error when he suggests to Tim that the store ditch The Burger Bible and then shows that he has a horrible singing voice, causing Tim to lose all respect for him.

Wayne was next seen in "The List," where upon hearing about the existence of Jonesy's fabled list he became obsessed with claiming it so that he could use the information contained therein to hopefully alleviate his loneliness. After this, he appeared in "Out Of This World," where he waited in line for tickets to the premiere of Blue Alien Vortex and along the way did his best to ruin Wyatt, Jude, and Jonesy's chances to get tickets. After this, Wayne showed up in "On Your Mark, Get Set... Date," where he took an IQ test for Jude (that he flunked), and then in "Role Reversal," where he went to a dance with Caitlin after she accidentally asked him out and got dance lessons from Tim when Tim caught him napping in the freezer. His final appearance came in "Bye Bye Nikki? Part 2," where he appeared in the farewell video waving goodbye to Nikki. 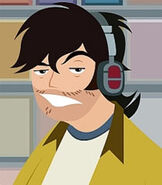 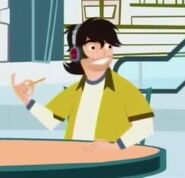 Wayne getting interrupted by Jonesy in the middle of eating fries.

Wayne when he's forced to work as a Taj Mahome Video employee.

Wayne with a gymbag.

Wayne as an employee of Burger McFlipster's.

Wayne pursuing Jonesy's list with an army.
Add a photo to this gallery
Retrieved from "https://6teen.fandom.com/wiki/Wayne?oldid=35066"
Community content is available under CC-BY-SA unless otherwise noted.