When Ron gets an assistant to help him with his security work, Mall Security ramps up its presence in the mall and begins enforcing all of the various rules and codes on everyone.

Ron is in his office with a new recruit, whom he is teaching the art of mall security. While the recruit doesn't buy in to Ron's proclamations of mall security being a higher calling, he does pay attention to Ron–especially when Ron points out the biggest threats to the mall, who just so happen to be six teenage friends who are blissfully unaware of the gathering storm. Blissfully unaware, that is, until Ron starts citing them for various infractions, ranging from loitering to conspiracy to ride a skateboard down an elevator.

None of the teens are happy with Ron's new behavior now that he has an assistant, and when they gather to vent about him they have their meeting broken up by an overbearing Ron. Ron quickly serves them tickets for disturbing the peace, misusing mall furniture, and simply because he doesn't like them. This only hardens the teens resolve, however, and soon Jonesy comes up with a plan to make Ron quit.

To get this done, he enlists Darth's help, having the nerdy gadgeteer build a device that will set off every alarm in the mall. Darth agrees, and once the device is safely in Jonesy's hands Jonesy uses it. Ron reacts to the alarms the only way he knows: isolating the source and attacking it. Ron knows that Jonesy was responsible for the alarms going off; however, what he doesn't know is that this is Jonesy's way of setting a trap for the mall cop.

When Ron arrives on the scene, Jonesy and Jude steal his cart and drive it through the mall. Ron gives chase on an elderly man's scooter, but they lead him on a predetermined path. First, they take him past the Khaki Barn, and there Nikki shoves a rack of clothes into Ron's way, where a bra blinds him. When he shakes the bra he finds that he's been led into an ice cream shop, where Caitlin sticks an ice cream cone into his face. When Ron finally clears his eyes he realizes that he's been led towards the bathrooms, and it's too late for him to turn.

Ron gets into a crash inside, and when he exits the bathroom he has a resigned look on his face. When he hears Jonesy and Jude planning the next day's chaos, Ron gives up and quits his job, and soon teenagers throughout the entire mall are partying. To make things even better, Ron's teenage assistant steps in as the mall's head of security, and unlike Ron, he is relaxed about everything the teens do–especially if it means that he gets to hang out with Caitlin.

However, not everything is perfect, as Caitlin learns when a disheveled Ron turns up at the Big Squeeze. When she talks to him, she learns that his job was his life, and Ron has nothing without his position at the mall. This breaks Caitlin's heart, and even though she knows she can't let Ron get his job back, she decides to try and get him a new job so that he can have purpose.

Caitlin's initial attempt is to get Ron employment at Frilly and Pink. When the store rejects him due to his personality, she tries again, this time at the Khaki Barn. While Nikki is resistant at first to the idea of Ron working in the same place as her, she changes her mind when she sees how Ron bosses the Clones around, and decides to let him stay. Eventually, though, Nikki realizes that Ron isn't right for the Khaki Barn when he starts planning military operations against competing stores, and she brings Ron to Underground Video. There, Ron manages to impress Wayne with his knowledge of war movies, and Wayne hires him to work in the blood-and-guts section.

Things only get worse for the other two employees at the video store, as Ron comes over to them and informs them that Caitlin set all three of them up to go see a movie. Neither Wyatt nor Jude are pleased to hear this, but when they confront Caitlin she refuses to change her mind due to how pitiful Ron is. Wyatt is then sent out to try and convince Ron not to hang out with the teens, but while at Grind Me he doesn't get a chance, as Ron first tries to convince Serena to go out with Wyatt again over Wyatt's protests, and then walks out before Wyatt can voice his objection to Ron hanging out with the teens.

With his back to the wall, Jonesy decides that there's only one solution: the group has to get Ron his job back. In order to do this, Jonesy hatches a plan. Once again, the plan starts with Darth, whom Jonesy enlists to put a virus into the mall's mainframe that will set off all the alarms. Once the virus is uploaded and ready to go, Caitlin steals Kai's keys while the security officer is distracted. As soon as the alarms go off, chaos hits the mall, and Ron instinctively rises from his seat. However, Ron soon sits down again as he realizes that he's no longer in charge–until Jen runs up and begs him to help. Upon hearing her plea, Ron realizes that even if he's not a mall cop in reality, he's a mall cop in spirit, and begins to sprint to the central security office to take care of the commotion. Along the way, the other friends encourage him, including Jonesy and Jude, who have stolen the cart again. This time, however, they use the cart to give Ron a ride, and when Ron arrives at the central security office he demands that Kai use his keys to turn off the alarms. When Kai admits that he lost his keys, Ron is on the verge of anger until Caitlin surreptitiously drops the keys in a corner and then points them out to Ron.

Ron picks up the keys, shuts the alarms off, and retakes his job as head of security. His first act is to fire Kai for losing his keys, and soon everything is back to normal at the mall. Everything, that is, except for the Khaki Barn, as Kirsten has begun bossing the other Clones around the same way that Ron did in his short tenure at the store.

Monitors of the gang. 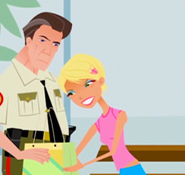 Just give me the ticket!

This clip was provided by TVShows411 on YouTube.
Community content is available under CC-BY-SA unless otherwise noted.
Advertisement