Stuart Goldstein is the manager of the Galleria Mall pharmacy and a recurring background character. He is an overweight bald man with glasses who is often poorly treated by people he meets. Often, he appears as a background character who is walking around the mall or standing in line at a store; if he is noticed by the narrative, it is usually only so that he can be humiliated or injured.

Stuart's characterization was established in the first scene of the show. There, he walked over a target that three pre-teen boys were spitting onto, and had a glob of spit land squarely on top of his head. Upon realizing what had happened, he called for security, but the three boys merely ran off and presumably received no comeuppance for their acts.

His mistreatment is not always related to humiliation or injury, however. More often than not, Stuart Goldstein is merely ignored. Quite often this happens at the Big Squeeze, where Caitlin doesn't notice his presence, although he has been seen being ignored at other stores, including the Penalty Box and the Khaki Barn. Although this is usually due to inattentive shopkeepers, there has been at least one instance where it was his own fault; in "The Big Sickie," he mistook an obviously fake mannequin of Jude for the real thing and spent three to four hours trying to procure service from Stick It.

Mr. Goldstein's largest appearance came in "Deadbeat Poets Society." There, it was revealed he was the manager of the mall pharmacy when he hired Jonesy to work for him. In that episode, it was revealed that he has a pharmaceutical oath, which states that all customer information is confidential, and that he takes the oath very seriously. When he overhears Jonesy breaking the oath and telling his friends all about Charlie Dobbs' suspicious purchases, Stuart Goldstein fires him on the spot. 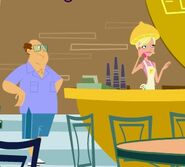 "Hello? Can I get some service?"
Community content is available under CC-BY-SA unless otherwise noted.
Advertisement