Start a Wiki
General
Script
Selling Out To The Burger Man is the third episode of Season 3 and the 57th episode of 6teen. It aired on Teletoon in Canada on September 20, 2007, and remains unaired in the United States.

Wyatt signs a contract with a corporate higher-up at Burger McFlipster's to record a jingle for the fast food chain. Meanwhile, Caitlin gets a sugar daddy, Les.

The group is seated around their main table when Caitlin closes the Big Squeeze and shows off her new outfit, which she got when her new boyfriend purchased it for her. Jen is impressed by this, and wants to know the name of Caitlin's new beau, only to be shocked when Caitlin can't remember. To make matters worse, Caitlin's boyfriend comes up behind her and puts his hands over her eyes so that she'll guess his name only for her to repeatedly guess the names of her exes. Eventually, Les gives up and reveals himself to her, at which point Caitlin excitedly introduces him to her friends before setting off with him to shop for purses.

When they return, they find Jonesy talking about his new job as a photographer in the mall. To prove his mettle, he sells Caitlin a photo of her and Les where she is noticeably in the foreground–a photo that Les pays for and then suggests that they put into a frame from Willows and Williams. After they set off, Wyatt sets off for work and Marlowe only for Jonesy to express surprise that they're still together. When Wyatt expresses annoyance that Jonesy doesn't think he can keep a girl, Jonesy responds that he just doesn't think that Wyatt has the money necessary to keep a relationship afloat for the first few months; while Wyatt contends that Marlowe isn't like that, he can't help but worry, especially when he sees Caitlin walk by with armfuls of purchases courtesy of her new boyfriend.

At Burger McFlipster's, though, Marlowe is happy to eat fries and listen to her boyfriend sing until Tim walks up with a higher-up from Burger McFlipster's corporate offices in tow. Cillian has a proposal for Wyatt: Wyatt will write the next McFlipster's jingle. Wyatt is at first reluctant, but with encouragement from his girlfriend and the memory of what Jonesy said about girls wanting providers ringing in his ears, he decides to sign on, and soon puts his signature wherever Cillian indicates.

Despite Marlowe's insistence that he'll be able to pull it off, Wyatt hits a wall and is unable to write until a stray comment from Jude inspires him. Soon, the band admits that he's written a good jingle, and they exit a recording studio with their work done. Unfortunately, that's when Cillian arrives and pulls Wyatt aside to inform him that Head Office wants him and his band to perform the jingle live in the mall. Wyatt is heavily against this, but Cillian insists and points out that it's in the contract. Marlowe helps Wyatt out, though, as she says she'll communicate it to the band.

As soon as Marlowe leaves, Wyatt calls Jonesy for help, but Jonesy doesn't think it's that big of a deal, as it's still a gig for the band. To Jonesy's credit, he seems to be right: when the group performs the jingle in front of a large audience, the crowd loves it. When Wyatt comes back to work, even Tim compliments him on the song before moving on to the next order of business: Burger McFlipster's is switching from fresh onions to freeze-dried ones. As soon as Tim finishes telling Wyatt about this, however, Cillian pushes him aside with more news for Wyatt: Head Office has rewritten the jingle's lyrics to make their food sound healthier.

Wyatt naturally reviles this attempt at compromising his songwriting, but he can do nothing, as the contract allows Burger McFlipster's to do whatever they please. When he shows up at rehearsal, though, he learns that they've gone far beyond what he expected, as his bandmates have been made to dress up in food costumes and the entire song–music and all–has been rewritten for him. Wyatt is unhappy, and promises to speak with Cillian, but it may be too late for him, as even Marlowe is contemplating deserting him.

When Wyatt tells his friends about what happened, Jen tries to cheer him up by pointing out that he's not dumped yet only for Jude to intercede and point out that as he saw it, Wyatt was pretty much dumped. Jonesy tries to comfort Wyatt by pointing out that there are plenty of girls still out there, but this only drives Wyatt to anger because he sees the whole mess as being Jonesy's fault. Wyatt's day only goes from bad to worse after this, as he finds out while at work that he's been putting sea monkeys (a recent promotion) on burgers instead of the designated freeze-dried onions. After this happens, Jonesy wades in and takes pictures of the ensuing chaos to use them as blackmail, as he's figured out that deleting bad photos is more profitable than printing good ones.

Wyatt then heads over to Grind Me, ready to be dumped by Marlowe. There, Marlowe gives him the news: the band is breaking up with him–but she's not. This energizes Wyatt, and when Marlowe leaves to try and convince the rest of the band to give him another chance, he sets off to get the band free of their contract. He manages to do so, and soon everything is back to normal for everyone, including Jonesy, who quit his job when Tim took Jonesy's camera and threw it in his face.

After Willows and Williams, Caitlin and Les hit up Huntington's, and when Caitlin eventually returns to the Big Squeeze she has three new outfits–all of them financed by Les, of course. Upon seeing this, Jen questions if she's dating Les for his money or for himself. Caitlin evades this charge, but when shopping with him later she begins to consider it more closely only for her introspection to stop when Les holds up a piece of clothing that she loves.

Eventually, though, Les and Caitlin end up at the Khaki Barn, where Les confesses to Nikki that he's having a problem: he's almost out of money from bankrolling Caitlin's shopping spree. Upon hearing this, Nikki decides to fix things, and enters Caitlin's changing room to have a chat with her. When this chat doesn't yield positive results, Nikki calls Jen over to talk, and Jen explains to Caitlin what's going on.

When Les confirms that he is broke, Caitlin is shocked, and is even more disturbed that he thought the only reason she liked him is because he was paying for her clothes–and she is made sad by the realization that this is true. However, she plans to make amends, and does so by returning everything he bought for her and giving him back the money. Les is grateful for her generosity, and gives her a barrette to remember him boy–though, as Caitlin's friends note, it will take more than that for Caitlin to remember Les among her menagerie of ex-boyfriends.

Caitlin and her new boyfriend, Les.

Jonesy as the mall's photographer.

Wyatt wonders if Marlowe cares about his money. 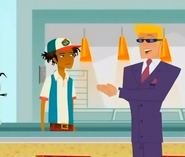 Wyatt making a deal with Cillian.

The band finishes recording the jingle.

Caitlin's pink skirt (behind the blouse).

Jen and Nikki talking to Caitlin.
Add a photo to this gallery

Retrieved from "https://6teen.fandom.com/wiki/Selling_Out_To_The_Burger_Man?oldid=35243"
Community content is available under CC-BY-SA unless otherwise noted.