Start a Wiki
Lydia is a woman with a penchant for stalking and an obsession with chickens. She has dated Jonesy Garcia and Wayne, who were both driven away from her by her clinginess and insanity. In addition to often driving her dates away, Lydia also doesn't accept being broken up with, as she tries to go out with people even after they've made clear that they don't want to date her anymore.

Lydia first appears in "It's Always Courtney, Courtney, Courtney!" There, Jonesy Garcia mentions that they've been dating, but he's trying to avoid her because she's incredibly clingy. Soon after he first mentions her, Lydia appears at his workplace and is only convinced to leave when Jonesy manages to show her that he has to work. She later reappears looking for Jonesy, who has hidden in the Pokey the Panda costume to avoid her, with a gift for him consisting of a life-size model of her heart that she made from an MRI she once got. Eventually, Jonesy breaks off his relationship with Lydia, but she refuses to accept that they're not dating anymore (saying "[breaking up] doesn't mean that we can't still go out!") until Nikki kisses Jonesy in front of her, which both proves to Lydia that Jonesy is done with her and restarts Jonesy and Nikki's relationship.

Her next appearance comes in "Welcome to the Darth Side." There, Jude Lizowski sets Wyatt Williams up with her, but when Wyatt realizes who she is, he avoids her by ducking under the counter at Underground Video. When Wayne walks into the store, she mistakes Wayne for Wyatt, and begins going out with him. Soon, though, Wayne gets driven crazy by Lydia's affections, and breaks up with her; Lydia refuses to acknowledge this breakup either, though, and continues to torment Wayne. Along the way she reveals a love for chickens, as she carries around a rubber chicken at one point and tries to give Wayne a taxidermied rooster as a gift. She also shows that she's unable to tell certain people apart, as she confuses Wayne for Wyatt repeatedly and when she sees them together assumes that they are twins, even though they look nothing alike. Eventually, though, Jude gets Lydia to leave them alone by telling her that the "Wyatts" are allergic to chicken and that a random guy likes her; this causes Lydia to transfer her affections to the bystander and begin chasing after him.

After this, Lydia makes a cameo appearance in "Waiting to Ex-Sale," where she donates blood. After that, she appears in "The Hunted," where she repeatedly calls Underground Video for psychic advice because the number for the video store is just one number off from an actual psychic hotline. In doing so, she reveals that she's still infatuated with Jonesy, as she asks questions about how to attract Jonesy's attention. Jude and Wyatt take this opportunity to prank her, and end up inadvertently ruining Jonesy's burgeoning neck-modelling career when their advice to her to "grab the bull by the horns" led to her leaping onto him, giving his neck a crick and costing him his opportunity.

"The Hunted" was Lydia's last major appearance, as she never showed up in a large role afterwards. She later showed up in "Fashion Victims," where Jonesy confessed to her his worries about losing a bet to Nikki Wong because he saw her as a random bystander; there, she didn't speak, and seemed confused by Jonesy's attention, showing that she may have gotten over him. She was heard in "Great Expectations," where she was one of the customers of Jonesy's make out matching service, and made a cameo in "Role Reversal" where she checked out Jude and Wyatt. 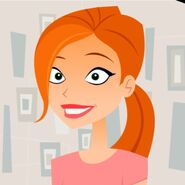 Lydia dragging Wayne around while carrying a plastic chicken.

Lydia with a taxidermied chicken.

Everyone is creeped out by Lydia.

Wyatt and Wayne are not twins.

Lydia calling the "psychic hotline".
Add a photo to this gallery
Retrieved from "https://6teen.fandom.com/wiki/Lydia?oldid=35765"
Community content is available under CC-BY-SA unless otherwise noted.