Jude Lizowski (Hugo Lisowsky in the French dub) is a fictional character in the animated Canadian sitcom 6teen. He is voiced by Christian Potenza.

Jude is introduced in "Take This Job and Squeeze It" as a laid-back skater without much of a sense of responsibility. He is the last of the group to show up, and is the last one to speak. He is remarked upon as being irresponsible, but also shows that he has a lot of free time and an affinity for counting things. Jude also quickly shows that he's generally honest, as when he is asked for a list of his worst qualities in a job interview, he gives out seventeen of them, as it never occurred to him to lie. Despite this, when instructed by Jonesy to lie during his interview at Stick It, Jude was able to fool his interviewer enough that he got a position as the manager of the store.

In addition to being naive about when to lie, Jude is also shown to be very inexperienced romantically, as he reveals in "The Khaki Girl" that up to that point he had never kissed a girl. His first kiss ended with him puking on his girlfriend; however, after that they ended up reuniting and went out for quite some time until breaking up in "Lights Out." After this, though, he was never able to keep a girlfriend for more than an episode (although this never seems to bother him).

Despite this, his focus is mainly on his interests: goofing off and skateboarding. The latter of these is something he does frequently, and he is often seen pulling tricks while skating through the mall and frequently skateboards down the escalator. He once entered himself into a speed-skating competition in "Girlie Boys," and tried to film himself pulling off skateboarding tricks in "Clonesy." In addition, he has attempted to teach people to skateboard: he tried to teach the Clones to skateboard (unsuccessfully) at the end of "The Swami," and taught Wyatt to skateboard in "Deadbeat Poets Society."

Jude's interest in goofing off is frequently seen, as in many episodes he does not go to work at all. His interests are aided by his jobs, though, as three of his four jobs were performed without any supervisors, and at Underground Video he was supervised by Wayne, whose attitude towards making Jude work was notably lax. As a result, Jude is often able to goof off and not do much work, although he has occasionally shown himself prone to bursts of work ethic (such as in "Sweet 6teen," where he becomes obsessed with perfect ice construction at the ice rink).

Jude is generally absent-minded and views the world in a different way. He enjoys counting things; he once counted all the blades of grass on his lawn, tallied the number of stores in the Galleria Mall (936), and enjoyed doing inventory at the Penalty Box in "Opposites Attack." Jude has a tendency to get involved in his own little world, and often carries a subplot by himself due to his different way of thinking about the world. He is even noted by Nikki in the finale as being one-of-a-kind, as her parting gift to him is a furry hat that she says he's the only one that can "pull off this look."

He was initially the manager of Stick It until it was shut down by Ron and the health authorities after Blade found a cockroach in a stick-it he bought from the store in "Going Underground." Later in the episode, he got a job at Underground Video and kept it until "Over Exposed," when he ostensibly quit in order to work at Burger McFlipster's; he definitely quit his job by the end of the events in "Snow Job" in order to work as the Zamboni driver at the Galleria Mall Ice Rink. He kept this job until "6 Teens and A Baby," when he was fired for accidentally leaving Emma Masterson Jr. unattended on the Zamboni, which had rolled out into the mall after its parking brake was accidentally released. In "Blast From The Past," Jude took over management of Gameatorium after the original owner suffered a heart attack, and remained the manager of the store through the end of the series.

Wyatt and Jude singing in the show's theme song 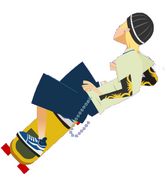 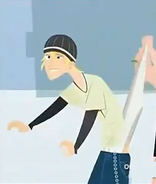 Jude with ice cream and a magazine.

Jude after taking a mop handle to his kiwis.

Jude stuck on the escalators.

Jen and Jude in "The Fake Date."

Jude and the gang in the Penalty Box.

Jude pretending to be a girl.

Jude with his skateboard.

"I thought I was reading the signs, man!"

Jude being carried by Nikki and Jonesy.

Jude in a princess costume, with Wyatt as his loyal knight.

Jude gets a thumbs up from Jonesy.

Jude in "Lights Out."

I once knew a skater who swallowed a fly...

Jude in "Snow Job," showing love to his skateboard.

Jude and Josh have a staring contest.

Jude in the theme song.
Community content is available under CC-BY-SA unless otherwise noted.
Advertisement