The Jude-Starr Relationship is the romantic relationship between Jude and Starr. They first met in "The Five Finger Discount," first dated in "The Khaki Girl," and broke up in "Lights Out." After this, they got back together again in "On Your Mark, Get Set... Date," but ended up breaking up again in the same episode after Starr decided that Jude wasn't smart enough for her to date.

Jude and Starr first met in "The Five Finger Discount." There, Starr comforted Jude after a chair he had fallen in love with was sold and was able to relate to him because she cried for two days when her mother threw away a desk lamp she loved the previous year. They then walked off to get a lemon squishy together.

Nothing more came of their relationship until "The Khaki Girl," when Starr asked Jude out on a date. On their date, however, Jude barfed in Starr's mouth when she tried to kiss him due to having eaten some rotten meat earlier in the day. Their relationship cooled after this, but Jude got back together with Starr after being inspired by a bad dream he had in "6teen: Dude of the Living Dead."

After this, Jude and Starr dated for most of the first half of Season 2, with the only mishap coming in "Deadbeat Poets Society," where Jude briefly broke up with Starr on bad advice from Jonesy–although they got back together at the end of the episode. However, Jude and Starr broke up for good in "Lights Out" after Starr went goth and Jude's attempt at being goth didn't impress her.

Starr reappeared, this time as a nerd, in "On Your Mark, Get Set... Date." There, she attended a speed-dating session and chose to see Jude again. Their attempt at rekindling a relationship was awkward, and Starr ended up dumping Jude after Jude flunked an IQ test she made him take in an effort to find out if he was "smart enough to date [her]." 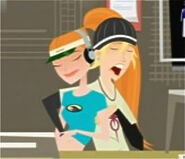 Jude and Starr sleeping together at Stick It. 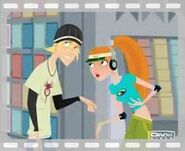 Starr about to vomit after being reminded of the vomit incident.
Add a photo to this gallery
Retrieved from "https://6teen.fandom.com/wiki/Jude-Starr_Relationship?oldid=35441"
Community content is available under CC-BY-SA unless otherwise noted.