Start a Wiki
Jonesy Garcia (Costa Rica Garcia in the French dub) is a fictional character in the animated Canadian sitcom 6teen. He is voiced by Terry McGurrin.

Jonesy's first appearance in the show portrays him as a lazy, laid-back irresponsible slacker with a penchant for women–a portrayal that stays true throughout the show. He is introduced as one of the original five characters of the group. In "Take This Job and Squeeze It," he establishes his personality quickly: he hits on his interviewer in his first interview at the Gigantoplex, brags that his biggest accomplishment was getting to second base with a girl named Jill Anderson, and is shown to be fairly dishonest, as he convinces Jude and Wyatt to lie in their second job interviews (a tactic that works to get them both jobs at Stick It and Spin This). He also gets himself a job at the Soda Hop, but is fired ten minutes after he starts working there when he hits on the boss' daughter.

This firing sets the tone for one of his characteristics, which is that in most episodes he gets a job and ends up fired within the same episode. Over the course of the series, he has held seventy-six jobs and personally employed himself fourteen times. His jobs are often lost through his laziness, dishonesty, or ignorance of rules. For example, he lost his job selling fragrances for being lazy, lost his job at Things That Beep for stealing a plastic pen, and lost his job at the Penalty Box for helping Jude babysit some kids.

In addition to being unable to hold down a job, Jonesy is also frequently depicted as not very good with women. Despite being able to frequently get women to accept his invitations to date, he is often single, in large part because of his overly-macho personality. In "Spring Fling," he inadvertently admits that he chases girls to fill a void in his life, and the person who asked him the question (Wyatt's date Brianna) theorizes that his machismo is an attempt to cover up the fact that he's actually uncomfortable around women. Despite this, though, Jonesy ends up having the longest-lasting relationship of all the main characters with Nikki–who had known him since grade school and was aware of many of his quirks.

Despite often appearing shallow, Jonesy cares deeply for his friends. For example, in "The (Almost) Graduate," Jonesy quits his job at Albatross & Finch in the most flamboyant manner possible due to the employees there picking on Caitlin, and in "The One with the Text Message" and "Fish and Make Up" he does his best to get Wyatt a date to try and help his friend get over Serena.

Jonesy is also an inveterate prankster. In "Boo, Dude," he appears to be the ringleader of the boys' pranks on Ron the Rent-a-Cop, and in "The New Guy" he organizes a prank so over-the-top that it gets Ron to quit. Also, in "Prank'd," he and his siblings engage in a prank war with Jen, and Wyatt reveals that Jonesy used to prank him repeatedly until Wyatt finally got Jonesy back with a prank.

Jonesy's original family consists of himself, his two brothers, and his father. Midway through the series, though, Jonesy's dad marries Emma Masterson, and Jen and Courtney become Jonesy's step-sisters. He also has a baby sister named Emma Masterson Jr, who was born in "Labour Day - Part 2."

Jonesy and his cellphone.

Jonesy reads Jen's diary while at the lost and found.

Jonesy after the first breakup with Nikki.

Jonesy in the theme song.

Jonesy with the Swedish stylists.

Jonesy with Hot Nerd Girl in "J is For Genius."

Greeter Gods and Greeter Goddesses force Jonesy to become one of them.

Jonesy and Nikki study in a quiet place.

Jonesy and the gang at the Penalty Box.

Jonesy inadvertently listening in on a conversation between Nikki and Caitlin.

Jonesy with a lightsaber.

Jonesy at the lost and found.

Relaxing in a massage chair.

Jonesy and Jude after they kissed. 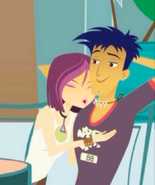 Nikki leans over for a kiss from Jonesy.

Jonesy gives a thumbs-up to Jude.

Jonesy partying with his friends.

Jonesy in a tuxedo.

Jonesy and Nikki hang out in Nikki's room.

Jonesy covers his ears as Vikki writes her name on the table.

Jonesy pulls his sister away from Katie.

Jonesy as a belly dancer.

Jonesy in the theme song.
Add a photo to this gallery
Retrieved from "https://6teen.fandom.com/wiki/Jonesy_Garcia?oldid=36435"
Community content is available under CC-BY-SA unless otherwise noted.