Great Expectations is the 88th episode of the series and the 8th episode of the fourth and final season. It aired on Teletoon in Canada on November 19, 2009, and on Cartoon Network in the United States on May 24, 2010.

Wyatt and Caitlin accidentally kiss–and love it! Meanwhile, Jen tries to get a few uninterrupted minutes with her boyfriend, and Jude's cousin Jade comes to visit and develops a crush on Jonesy, much to Nikki's displeasure.

Jonesy once again has a new job. This time, he's working at the miniature golf course, and has found a way to make extra money by selling people the opportunity to meet up and kiss inside dark places inside the obstacles on the course. While Nikki thinks that his plan is rather disgusting, he has plenty of business, and even Wyatt and Caitlin are interested, asking to be set up with a girl in a blue dress and a guy named Bradford, respectively. However, Jonesy's not paying too much attention to when and where he schedules the kisses, and he books both Caitlin and Wyatt for the UFO at 8:40 P.M.

That night, Caitlin and Wyatt meet in the UFO and have a magical kiss. As soon as it's over, Caitlin tells him that the kiss was great–only for Wyatt to recognize her voice and question what just happened. Wyatt and Caitlin are both shocked by the revelation that they kissed each other accidentally, and when they meet at the Big Squeeze the next day, things are still awkward between them. Nikki notices, but before she can question them about what's going on, Jen gets a text message announcing that Travis is coming to the mall for a visit. This makes her giddy, so much so that she's able to ignore the new baseball promotion at the Penalty Box. Jude then skates up with his cousin Jade, and reintroduces the group to his cousin.

Later, Jen is at work at the Penalty Box when Caitlin and Nikki walk in. It seems that Caitlin needs advice: she and Wyatt kissed, and the kiss was fantastic. At the game store, Wyatt is undergoing the exact same thing with his male friends and Jade. Neither side has a solution; Jonesy advises Wyatt not to date her because he won't be able to get away with anything, while Jen and Nikki are shocked that Wyatt is apparently a good kisser.

Caitlin and Wyatt then bump into each other while getting coffee from Grind Me. They have an awkward conversation where Wyatt ends up accidentally calling the kiss a screwup and embarrassing Caitlin. This injures their friendship, as Caitlin is unwilling to see him because she feels hurt and humiliated. Jen and Nikki are not pleased with this turn of events, though, and they decide to get Caitlin and Wyatt back together again. To do this, they each individually call Caitlin and Wyatt and tell them that Jude broke his leg by the fountain. Naturally, Caitlin and Wyatt rush to the scene only to find each other and no broken-legged Jude. Initially, Caitlin tries to run away, but Wyatt apologizes and tells her that he thought the kiss was amazing but was afraid it would wreck their friendship. Caitlin points out that what they're doing is wrecking their friendship anyway, and Wyatt agrees with her assessment. Gingerly, they ask each other out.

For their date, Wyatt takes Jonesy's advice and gets dolled up with a suit and tie, hair gel, and cologne. Unfortunately, he messes up from the start by using too much cologne, and compounds his error by taking Caitlin to Cafe Coeur Brisé. After they finish an awkward dinner, they head over to the golf course and get partway through a round of golf before deciding to kiss. This kiss doesn't bring any sparks, though, and a second attempt yields no better results. Caitlin and Wyatt try to figure out what's different, and they realize that their kiss only seemed great because they thought they were kissing somebody else. Instead of being disappointed, though, both are relieved by this realization, as it means that they don't have to go on another horrible date with each other and can go back to just being friends.

Sub-Plot One: Dating a Superstar

When Jen finally gets to see Travis, she's standing beside the fountain waiting for him. However, before they can reunite, Travis is swarmed by a crowd desirous of autographs. Jen calls him, and they make plans to meet for dinner. At dinner, though, it's the same story: everybody wants a piece of Travis, even the waitress at El Sporto's. To make matters worse, he gets called away in the middle of dinner, but makes a deal to make the next day all Jen's. He isn't able to keep this promise, though, and an offhand statement by Coach Halder makes Jen paranoid that Travis is cheating on her.

Jen decides to find out the truth, and starts out by stalking Travis. When she sees him giving interviews to a group of gathered reporters, she disguises herself as one and asks him who he goes out with. Jen doesn't get an answer, though, and nearly blows her disguise, so she sneaks away. She does hear him mention a meeting by the fountain at six while spying on him later, though, and decides to catch him in the act. When six o'clock rolls around, however, she is unable to get out of her baseball glove costume, and ends up falling down an escalator while trying to get to the fountain. Travis witnesses this while talking with a businessman and breaks off the meeting to talk with his girlfriend. While talking with her, Travis realizes that she's been spying on them–and that their relationship isn't working, mainly because he's too busy to really commit to it. They then break up, and Travis walks away while Jen struggles not to cry.

After Jude reintroduces Jade to his friends, Jonesy and Jude proceed to hang out with his cousin at Gameatorium. There, Jade beats Jonesy's high score on a game, much to Jonesy's disappointment. She then follows him to work, where Nikki points out that Jade obviously has a crush on Jonesy. Jonesy is unsurprised by this, but he is surprised when Jade gives him a copy of Modern Currant's newest CD as a gift.

Nikki tries to warn Jade off of her boyfriend, but Jade defends herself by saying that it's just a gift. She then draws Nikki into a contest over what Jonesy likes and ends up proving that she knows more than Nikki does about Jonesy's preferences, from Jonesy's taste in hot dogs to his blood type. Nikki's annoyed by Jade's knowledge of Jonesy, but is willing to let it pass–until Jonesy walks up to her later with a brand-new pair of expensive shoes that he got from Jade. This convinces Nikki that Jade has been shoplifting for Jonesy.

Jade continues to get Jonesy gifts, and Nikki decides she has to do something. Nikki then begins to follow Jade around to try and catch her in the act. She eventually does so when Jade attempts to steal from Things That Beep. Nikki is ready to drag Jade to Mall Security, but in doing so Ron catches her engaging in an activity that looks quite a bit like theft, and soon Nikki is locked in a cell in the Mall Security office. She calls her boyfriend, but when he arrives he learns that Jade is the one with the keys, and she has a specific demand: Jonesy will become her boyfriend. Jonesy is at first unwilling to agree, but when pressed, he gives in, and Jade tosses him the keys before leaving the office. Jonesy then lets his preferred girlfriend out of the cell–just as Ron arrives back at security HQ to catch him in the act. However, Jonesy defends himself by having Ron look at the tapes, and on them Ron finds evidence of Jade's treachery.

Jude eventually bails out his cousin, and Jade reveals that she's going to have to take Jonesy's gifts back. As it turns out, Jade wasn't shoplifting; instead, she was using the money that Jude's folks had left behind to pay for food to buy the gifts. Jonesy hands them over, and Jade then invites him to play mini-golf later, but Jonesy has to decline because he has been fired for his scheme. Upon hearing that Jonesy has been fired again, Jade breaks up with him, and counsels Nikki that she could do better than her constantly unemployed boyfriend. 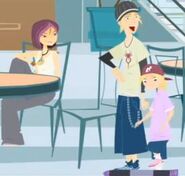 The crowd blocks Travis and Jen from seeing each other.

Travis and Jen try to make out for the last time.

Travis hugs Jen good-bye after they break up.

Community content is available under CC-BY-SA unless otherwise noted.
Advertisement