Courtney Masterson is the older sister of Jen Masterson.

Courtney is introduced as coming home from university in "It's Always Courtney, Courtney, Courtney!" There, Jen reveals that she has an inferiority complex with regards to her older sister, due to how Courtney treated her. Apparently, when Jen was in second grade, Courtney stole her best friend by virtue of having better Barbies, and Courtney also stole a boyfriend from her because Courtney's breasts were larger than Jen's. As a result, Jen is paranoid that Courtney will steal the rest of her friends.

Soon, Jen's paranoia seems to be justified, as Courtney is not only easily able to charm the guys, but also Caitlin Cooke (by saying that Caitlin had a great eye for halter tops) and Nikki Wong (by complimenting her on "trying to change things from within" at the Khaki Barn). Furthermore, she does this while putting Jen down subtly by telling the group embarrassing stories of when Jen was younger, including a story about Jen falling into a pile of dog poop at her cousin's wedding and one about how Jen liked to run around the yard naked.

She then managed to make Jen look like an uptight party-pooper and insult her at the same time when they go to get pictures taken at Jonesy Garcia's workplace, where she makes Jen dress up like a monster for a group picture (which Jen does not want to do). Courtney then made fake IDs for the group of teens so that they could go to a dance club and bar. She did this both to appear cool to Jen's friends and also to make Jen look uptight.

However, Jen became fed up at this point and snuck into the club using the fake ID Courtney made for her in order to convince her friends she was fun. While in the club, the straps holding up the top of Jen's dress broke, and she flashed the whole club. When Jen realized this, she ran to the bathroom while Courtney made fun of her. This led to the group of friends realizing that Courtney was mean; their changing opinion solidified when Ron the Rent-a-Cop found them in the club and dragged them off to mall jail and Courtney did nothing to stop him, even denying that she wasn’t with the group.

Jen didn't stand for this when she got back, and she dragged Courtney off while lecturing about responsibility. This lecture prompted Courtney to snap that Jen was "always Mom and Dad's little star," as it seems that Jen's responsible nature was something that their parents always appreciated. Courtney apparently felt inferior to Jen for most of their childhood, and retaliated by being the "fun" sibling to Jen's "responsible" sibling. Unfortunately, this this ultimately led to Courtney getting kicked out of her university, which was apparently the real reason on why she came home for spring break (instead of going skiing with her friends like she normally would've). After hearing, Jen patches things up with Courtney, and the two managed to get Jen's friends out of jail by blackmailing Ron with a picture of him in a speedo that Courtney had found in a file at Jonesy's workplace.

After this episode, Courtney appears intermittently throughout the series. She becomes the older stepsister of Jonesy, Diego and Robbie Garcia in "The Wedding Destroyers" when her mother marries Mr. Garcia. There, she and Jen teamed up as "the girls" against "the boys" as tensions between the families rose, and they argued together during negotiations on how to effectively become a family that Ron arbited.

Courtney appeared again in "A Crime of Fashion," when she dumped Robbie on Jonesy in order to go on a date, and again in "Opposites Attack" where she stated that she was just "in town to run some errands." This statement implies that although she was booted out of university, she has not moved in with the Masterson-Garcias; it is unknown where she lives, although her statement suggests that she has either taken a job or is attending a university somewhere out of town.

Courtney's final appearance is in the Labour Day episodes. There, she hits on her mother's doctor and generally acts like herself. However, when it appears that Jen isn't going to be coming, Jonesy gives her a speech about how they both have to band together if they're going to get through this, and that it's possible if they do so they might manage to be as responsible as Jen. Jen shows up at this point, but Courtney was willing to swallow her fear for a moment for her mother and be responsible when she gave birth to her baby half-sister. 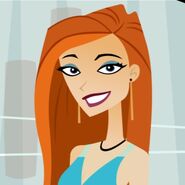 Courtney in her bridesmaid's dress. 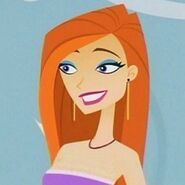 Another closeup of Courtney.

Courtney and Caitlin visiting Jen at The Penalty Box.

Courtney in Club X-S with the 6teen gang.

Courtney dropping off Robbie with Jonesy outside the Soda Hop.
Add a photo to this gallery
Retrieved from "https://6teen.fandom.com/wiki/Courtney_Masterson?oldid=36269"
Community content is available under CC-BY-SA unless otherwise noted.