Start a Wiki
Coach Halder is the manager and owner of the Penalty Box. He is a very strict disciplinarian at work and ostensibly while not at work. He has a loud speaking voice and is obsessed with sports. Despite his name, it is unknown whether Coach Halder actually coaches a team or if his title is just the Penalty Box's name for their managers (as Jen's title was Assistant Coach rather than Assistant Manager when she got promoted in "Wrestlemania").

Coach Halder was introduced in the first episode as Jen's soon-to-be boss. He threatened to fire her when he heard her yell at Caitlin for screwing up while training her to work at the Big Squeeze. While he didn't fire her, this was only because Caitlin stood up for Jen. Despite his quick trigger finger in this episode, when he caught Jen skipping out on work in the next episode, he merely placed her on probation instead of firing her.

In fact, despite Halder's tough demeanor, throughout the show's run he was unwilling to fire Jen. In "Wrestlemania" he threatened Jen with job termination if she didn't sell all the wrestling gear she ordered; however, when not all of it got sold, he still kept her on as an employee (although, admittedly, this is because Jen still managed to sell enough with the help of Jonesy–who also donated part of his paycheck from the episode–to make up the cost of the wrestling gear). In addition, when Jen goofed off most of the day in "Career Day," he didn't fire her (although he came close). It is unknown whether he is unwilling to fire people or whether he's just unwilling to fire Jen due to her being a good salesperson.

Despite valuing Jen as a worker, and occasionally showing this (such as when he promoted Jen to Assistant Coach in "Wrestlemania), Coach Halder generally doesn't value his employees (or customers) very much. The most prominent example of this is in "Boo, Dude," where he constantly attempts to scare his customers. However, examples come in other episodes; for instance, in "Another Day at the Office" he promises some extra shifts to Jen but then rescinds them to give to Charlie Dobbs with the only rationale being that he "likes him better."

Besides this, Coach Halder often punishes employees by making them sit in the penalty box (a literal hockey penalty box located inside the store). Sometimes, these penalties are for legitimate infractions, such as when he put Jen in the box for ten minutes for wrestling a customer (plus two minutes extra for losing the fight) in "Losing Your Lemon." Sometimes, though, these penalties are nonsensical, such as when he penalizes Jen for saying that she likes soccer in "A Ding from Down Under."

Another one of Halder's traits is his hatred of the concept of love. He penalizes his employees with fifty push-ups if they're in love on the job, and makes them do fifty push-ups if they even say the word "love." Admittedly, he is willing to do these push-ups too if he says the word love and is called out on it; however, his penalties for love on the job actually managed to break up the relationship between Jen and Charlie Dobbs.

Despite his gruff exterior, Coach Halder apparently has some hidden depths. He is a regular attendee of open mic poetry readings at Grind Me, and frequently performs poems about sports there. He also is apparently aware that he often comes off as self-absorbed, as evidenced in "The Swami" when he asked Jude for help with better showing people he cares about them.

Coach Halder is mad at Jen.

Coach Halder pinned down by Jonesy.

Coach Halder and others in the audience cheering. 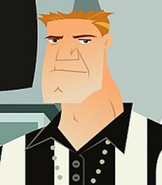 Just another day in the life of a coach.

Coach Halder and others ready to party at Mr. Garcia's stag.

Coach Halder being spied on.

Coach Halder at the Big Squeeze.
Add a photo to this gallery
Retrieved from "https://6teen.fandom.com/wiki/Coach_Halder?oldid=35718"
Community content is available under CC-BY-SA unless otherwise noted.