Start a Wiki
Charmaine is the main (and likely the head) barista at the Grind Me coffeehouse. She is implied to be Serena's closest friend, as she is the person who is seen hanging out with Serena the most. Many of her appearances in the show consist of walking around with Serena.

She was introduced in "A Lime to Party," where Wyatt and Jonesy got coffee from her. While there, Jonesy tried flirting with her while pretending that he was the regional manager of Grind Me. Unfortunately for him, Wyatt revealed that he was unemployed when Jonesy asked for money from Wyatt. However, Charmaine came down to party at the Party Lime later in the episode, and she invited him to come see her at Grind Me at some point. Despite this, Jonesy was never seen going out with her, which implies that he saw no further success after impressing her with the wild party.

Besides that, most of her lines in the first season came when she was talking to Serena. Most of the time, this involved them talking about their boyfriends, which at one point sent Wyatt into a spiral of worry on Valentine's Day when he thought that Serena might not like what he was planning on doing for their date that night. Charmaine's only other appearances came when she served someone at the coffee shop.

Charmaine's only major appearance came in "Deadbeat Poets Society." There, Wyatt suspected that she was giving him less foam in his coffee after he and Serena broke up. His friends all thought he was being paranoid, so to prove it, Wyatt took measurements. When he came to them with the measurements that proved he was right, his friends ignored him, and Jude suggested he go see Starr about his paranoia. When he did so, Starr told him to chill out, and to assist with this, she suggested that he go and read poetry. Starr then took him to the coffee shop, where Charmaine was heading the open poetry sessions.

After "Deadbeat Poets Society," Charmaine did not make any other important appearances. Most of the time she was seen after that episode was either at work or while walking around the mall. Usually, when she was seen doing the latter, she was accompanying Serena. 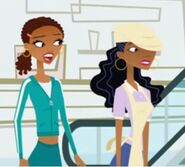 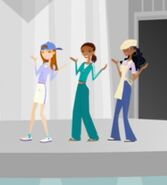 Add a photo to this gallery

Retrieved from "https://6teen.fandom.com/wiki/Charmaine?oldid=35159"
Community content is available under CC-BY-SA unless otherwise noted.