Start a Wiki
General
Script
Cecil B. Delusioned is the 20th episode of the series. It aired on May 15, 2005 in Canada on Teletoon and remains unaired in the United States.

Jonesy's uncle gets him a job at a local TV station, and Jonesy uses his position to talk his way into getting a TV camera which he then uses to film his friends in an attempt to make a pilot for a reality TV series. Meanwhile, Jen helps Wyatt figure out a way to pass gym.

Jonesy's new job is as an assistant for WVIEW TV, which is shooting a spot at the mall. As soon as they finish up with the reporter's part, the cameraman mentions that they need to take some more shots, but the reporter just wants to leave, so Jonesy volunteers to take the shots for them. Although the cameraman is reluctant to trust him with a camera, he bows to his boss' wishes, and hands Jonesy the camera.

Soon, Jonesy is filming his friends. While Caitlin is excited at the prospect of being on camera, Nikki is adamantly against being filmed, and neither Wyatt nor Jen are particularly enthusiastic about being stars. Annoyed by his friends unwillingness to help, Jonesy heads over to Stick It to find Jude and see if he wants to be on camera. Soon, Jude is helping Jonesy film a cooking show by making stick-its; however, the slow pace at which they cook bores Jonesy, and he asks Jude to speed up. Jude obediently turns up the heat on the grill, and a fire breaks out. Jonesy films it while Jude does his best to put out the fire. While Jude succeeds, he notes that it will take about a week before the grill will be fixed, so Jonesy invites Jude to host the show with him.

Later, Jonesy is auditioning Caitlin in different outfits, trying to find one that will work onscreen, when Wyatt walks up and asks how much longer high school is. When probed as to why he's wondering, he admits he's failing a course, and Jonesy grabs his grades to figure out which one it is. While reading down the list, he finds that Wyatt is getting straight As in everything except for Physical Education. Jude then arrives with a coffee for Jonesy, and Jonesy pulls Jude off so that they can film his new idea: a reality cop show. Jen, meanwhile, grabs Wyatt and tells him she has an idea.

The reality cop show that Jonesy has in mind is filming Ron the Rent-a-Cop as he works his beat. Unfortunately, they don't capture much action; all that they get is Ron extorting a taco from Julie and an old man accidentally littering. Despite the lack of action, Ron plays up the severity of this infraction and treats it as needing a physical takedown. After finishing his takedown of the old man, Ron confiscates the tape, labeling it "evidence."

Jonesy needs a new idea, and an offhand statement by Jude is just what he needs to come up with a new plan. This plan is a prank show, where Caitlin and Jude prank people. And Jonesy has the perfect victim in mind: Nikki, who refused to get a makeover when Caitlin suggested it. The prank that they'll pull off is to give Nikki a girly-girl day against her wishes with Caitlin.

The crew head over to the Khaki Barn. Once there, Caitlin heads in and, while in tears, improvises a story about a bad breakup and wanting to take a spa day with a female friend. At first, Nikki refuses, but Caitlin's pleading convinces her to go through with it. Upon hearing this, Caitlin leads Nikki to the spa.

While Caitlin is getting Nikki to the spa, Jonesy and Jude visit Darth in search of camera equipment. Specifically, they want to spy on people. Although Darth seems a bit too knowledgeable about the types of spy cameras that he has, he sets them up with a long cord of a camera that can be used to peer around corners and film people. Jonesy is enthused by the camera, and he takes it off to the spa to use to spy on Nikki.

The camera they choose to use is the original TV camera, and they film from behind a portable camera with towels on top. Nikki doesn't notice them as she gets a wax; however, the duo get a full shot of the wax. As soon as Nikki's day at the spa is done, they move to follow, and along the way Jonesy bumps into a bowl of melted wax and spills it on his arm.

The next stop on the tour is a visit to Albatross & Finch. There, Jonesy surreptitiously instructs Caitlin to get Nikki into a bikini. Although Nikki initially resists the swimwear, Caitlin's quivering lip convinces her, and she goes into the dressing room to put it on. Meanwhile, Jonesy and Jude creep through the air vents in order to shoot inside the dressing room. When they reach the vent, they find that Caitlin, Nikki, and Jill are all stuck in the changing room, and that Nikki is finding it impossible to get her bikini off. Jonesy removes the vent cover to get a better view and has Jude lower him to get a better shot. However, as Jonesy is lowered, the ceiling beneath the vent begins to crack, and it finally gives way just as the door is opened by Wyatt, who had been sent by Jen to save Nikki.

As soon as Nikki sees Jonesy and the camera, she realizes that he was filming her. Further interrogation of Caitlin reveals her part in the scheme. Upon realizing how her friends played her, Nikki angrily kicks them out of the changing room and then throws coathangers at them.

Later, most of the gang has gathered by the Big Squeeze. Caitlin is trying to get back in Nikki's good books by apologizing, and she mentions that Nikki looks fine as she is. Jonesy then arrives, looking sad, as he's been fired for misusing and breaking the camera. However, Jen has news for him: Wyatt can be their goalie in their Sunday night hockey league. Jonesy is impressed by this, but has a different matter that he wants to bring up; it seems that while he was in the spa, he spilled something on his arm and he can't get it off. Of course, Caitlin and Nikki know what it is, and they send him to the spa to get it removed. They then follow him there in order to watch Jonesy get a wax.

Jen's plan is to help Wyatt pass gym by finding a sport he's good at. The first thing they try is tennis, but the only result is that Jen gets a black eye. As they work their way through the other sports, they find that Wyatt isn't good at anything–until Wyatt mentions he was good at a video game where you had to block bombs. This convinces Jen that Wyatt has good reflexes, and she pushes Wyatt into the goalie's net. Once in the net, she fires shots at him, all of which he blocks. Wyatt realizes that he can be a goalie and pass gym in that way. With his problem now solved, Jen sends Wyatt off to rescue Nikki from her bikini torture. 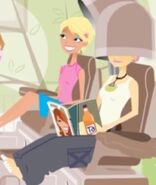 Nikki's way of showing off in a bikini.

Caitlin tries to calm Nikki down.

Caitlin and a Greeter Goddess trying to pull a bikini off of Nikki.

Jonesy excited to see Nikki in her bikini.

A furious Nikki throws hangers at everyone.

Jonesy tells everyone that he got fired again.

Caitlin and Nikki plan their revenge on Jonesy.

Nikki and Caitlin laughing.
Add a photo to this gallery

Retrieved from "https://6teen.fandom.com/wiki/Cecil_B._Delusioned?oldid=33486"
Community content is available under CC-BY-SA unless otherwise noted.